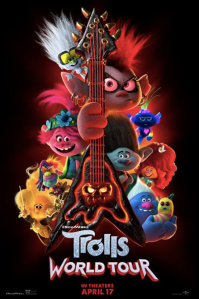 It may be a harsh thing to say, especially given the severity of the issue, but not having every big budget movie get released to the masses turned out to be a blessing.

Trolls was very popular when I was kid. Then when I became an adult, a blockbuster movie (and number one song), brought Trolls back into my life, even though I didn’t need them there. Of course when something makes money, people in power want more money so they come up with sequels to sell more toys and songs.

I enjoyed the first Trolls movie, way back in 2016. I wasn’t head over heels in love or anything, so I was quite content with a one off film. Instead we were given Trolls World Tour as a present in the middle of the worse year of most people’s lives.

Thankfully this animated dumpster fire was only 1:30 long because I don’t know if I could have lasted a minute longer. The writers, animators, and director took a decent idea and utterly destroyed it. They thought by mucking up a story about the past and all these other colonies that people we interested, entertained, and engaged. Sadly, they forget everything I just suggested and produced a really bad movie with no catchy songs.

Most of you have probably already spent money to watch World Tour and I have to say shame on you. When you continue to fuel the imagination of those who lack creativity, it just spawns more bad ideas. We waited a long time before sitting down to watch World Tour. We didn’t even spend a penny on the film because it now available on Crave for free.

The introduction of new characters like Queen Barb (Rachel Bloom) as the bad guy was so pointless. Yes, she is psycho and wants to destroy all the music colonies except her own, but in the end she was weak and didn’t even manage to finish her task. Branch (Justin TImberlake) is an after thought in this journey. He’s rejected and disregarded at every turn ever though he’s right. Of course to add more drama to the story, he spends the entire movie gaining the courage to tell Poppy (Anna Kendrick) that he loves her.

Poppy meanwhile wants to be a great queen and reunite the colonies, except she’s so dumb and blinded by the joy of hugs and songs that she doesn’t have a clue what’s really going on. I get that this is suppose be a kids movie and all, but adults are watching it too. No matter who you get to voice new trolls, if the story is terrible, we will tune out.

I’m sorry I got my advice out to you so late. If I can still save some of you, great. Don’t watch Trolls World Tour, you will just waste your time. 1/10