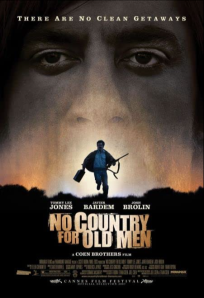 There are over 1700 movie reviews on this blog. I’d say the majority of the time, I complain about how slow-paced movies are not for me and my scores usually reflect those feelings. No Country for Old Men will definitely be an exception to the rule.

I’ve seen this movie once in my life and barely remembered the details. Sure, I could have told you who starred in it. However, everything past that is a fuzzy memory. No Country for Old Men won the Oscar for Best Picture in 2007, when I probably have skipped it at the video store.

Written and directed by the Cohen brothers, Ethan and Joel, No Country for Old Men didn’t impress me the first time (pretty much like most Cohen projects). I recently noticed the film on Netflix and told my wife we needed to give it a shot, considering she’d never seen it. She was interested because the bad guy is played by Javier Bardem and the main star is Josh Brolin, two of her favourites. It didn’t take much convincing after that, except that I needed to convince myself that it was worth a second viewing.

I had totally forgotten this was about a drug deal gone bad and a briefcase worth two million dollars. I thought the cat and mouse game between Anton (Bardem) and Llewelyn (Brolin) was brilliantly written and acted out. The characters used their surroundings and tricks to enhance the tension of the chase. Just when you thought one had the upper hand, you come to find out the other has made up ground, and the pair are separated by a thin margin of error.

After much discussion, we both kind of wondered why the Sheriff, played by Tommy Lee Jones, had such a vital part in the story. He really had no significant impact on the ending or the build-up to the ending. I enjoyed his character because he’s a run-down old sheriff who has seen it all along the border; however, this particular case is something so new to him that he doesn’t know what to make of it. He’s wise and a great storyteller; however, the film would have survived and still racked up awards without his inclusion, no offence to Mr. Jones.

I would understand if you read the synopsis for No Country for Old Men and passed. I wouldn’t understand if the film is recommended to you by other people and me how you could pass. This film definitely isn’t the greatest Best Picture winner of all-time, yet it would fall within my top 10 of the 40+ I’ve already seen. 8/10