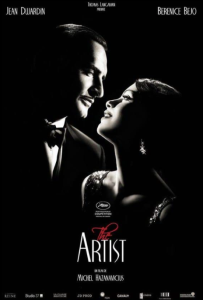 The Artist won the Academy Award for Best Picture in 2012. In a generation with CGI monster battles, cell phone movies, and state of the art makeup effects, The Artist was a throwback to the Golden Age of film, the silent film era.

Jean Dujardin is George Valentin, his generation’s greatest actor. Whatever project he is attached to, his sidekick dog is right by his side, and the theatre house is always packed. The film is undergoing a change thanks to the introduction of talkies, films with sound. Valentin’s refusal to change his career trajectory leads to his fall from grace and Peppy Miller’s rise (Berenice Bejo), Hollywood’s newest superstar.

Valentin opened the door for Miller, and the two rarely cross paths again despite being in the same industry. She’s never had the chance to thank him, but that’s not the focus here. Instead, we watch Valentin struggle through the market crash in 1929 and the Great Depression, which is where he loses everything he owns.

You got to feel bad for the guy who has nothing after once having it all. George is a great guy and never showboated his fame and fortune. Peppy, meanwhile, is a sweetheart and appreciates everything that has happened to her career. Unbeknownst to George, she uses her money to buy all his possessions at the auction and offers to provide care for him after he is injured in a house fire.

She’s been crazy about him and wanted to thank him for helping her get started in the business. There is undeniable chemistry between the two, and when the truth comes out, it may be too late.

I have avoided this movie for almost a decade since I didn’t think a silent, black and white film would be for me. I was quite impressed with the performances and how easy it was to follow the story without any sound. The Artist is only 1:40 long, and I will say this may have been the quickest movie I’ve ever watched. I am not sorry that I waited so long to catch this film; however, I will advise anyone who wouldn’t give it a chance to actually sit down and give it a go. You may be impressed like I was. 7/10