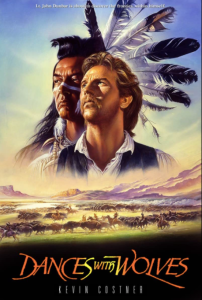 Dances with Wolves came out in 1990, and it took me 30 years to finally watch this amazing western film. It’s been a few days, and I’m still processing everything I witnessed. In the beginning, I thought this would be the most boring film, then the story picked up and carried us through the adventures of the only white man on the western frontier.

In case you didn’t know, this film was Kevin Costner’s directorial debut, which netted him an Oscar for his vision behind the camera. Although he didn’t win Best Actor, the rest of his crew took home another six Oscars. The first major film of the ’90s was nominated for 12 statues, putting it in some elite company.

For more than a decade, I’ve been saying that I do not have a favourite western film, and I think Dances with Wolves will take the crown. I enjoyed the performances and Costner’s ability to mingle with the local Sioux who hunt the area looking for buffalos. At first, it was all about the unknown and intimidation. Then the lines of communication are open, and even though neither side fully comprehend what the other is saying, they agree that buffalos are the name of the game.

Over an unspecified amount of time, Lt. Dunbar (Costner) becomes an honorary member of the Sioux tribe, earning the nickname Dances with Wolves after a group of them see him playing with his best friend Two Socks, a stray wolf. On top of his canine friend, Dunbar is close to his horse Cisco, who always returns home no matter who kidnaps him.

Dunbar helps the Sioux follow the buffalo only to learn that their enemies Pawnee have killed them all. The group prepares for a battle and finally defeat the Pawnee, who have destroyed them for years. After achieving a victory that no one thought was possible, the Sioux decided to move to find more Buffalo. Dunbar returns to his post to be captured and tortured for being a traitor.

The final 1:30 of the movie was filled with drama and conflict. It was pretty quiet to that point, but the Sioux find themselves drawn into two battles, one to save themselves and then to save one of their own. If you were not interested in the story until that point, I could tell you that things turn up pretty quick, and the action is pretty good.

It is impressive that Costner managed to play a great character and leader while taking his turn in the director’s chair. I loved that he learned the Sioux language over time and was able to communicate with everyone with no problems. He was so respected in their community that they even allowed him to marry a widow who was still in mourning for her husband’s loss.

I understand that this story took place over 200 years ago. Left hung out to dry by himself in the middle of nowhere, Lt. Dunbar did the best he could with what he had, which was nothing. When the United States army shows up, they are abusive jerks who don’t believe a word of Dunbar’s story. People mock the US military all of the time for being macho men, and this film does a great depicting that.

Many moments will break your heart and so many others that will make your blood boil. You know you are watching a great film when you have the opportunity to manipulate all your emotions. I loved watching Dances with Wolves and would never be opposed to watching it again. I read about a Director’s Cut, so maybe I will track that down someday. 9/10