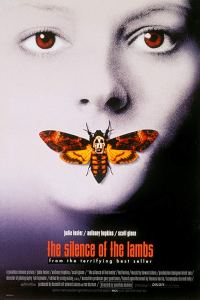 This blog is winding down its seventh year of existence. In that time, we’ve covered over 1700 films and recently started to tackle all the Best Picture winners. Somehow, we never got around to reviewing the best film from 1991, The Silence of the Lambs.

I can tell you that I’ve seen this film at least three times a year in that time frame. In 2019 I even attended a Classic Films series showing, my first viewing on the big screen.

Just like I have mentioned in a handful of other iconic film reviews, there is nothing I could say about The Silence of the Lambs that hasn’t been saying before. Anthony Hopkins steals the show in a career-defining performance, while Jodie Foster carries the entire story and ending on her shoulders. Fresh of recruit, this girl isn’t afraid of anything, and it is her courage and strength that saves the day.

My first experience with this compelling drama had some complex adult issues that I never understood as a teenager. I don’t even remember what I initially thought. The only word that comes to my mind is creepy. That was probably more than 20 years ago, and now when I watch the film, I’m engaged, still learning interesting things I never caught the previous times.

The Silence of the Lambs is such an interesting movie, and no matter what films followed it, this will always be the best. It just has the right amount of darkness and grit in it. I barely remember life as a young kid, although I feel this film really fit the time period it is set in. You could not pull off this type of thriller in 2021. People’s movies’ expectations have changed and been spoiled by thousands of movies since this one’s original release.

Clarice Starling and Hannibal Lector will forever be linked together. Their professional relationship and personal connection make them one of Hollywood’s more iconic couples. Not that either want to be associated with the other, since one catches bad guys for a living and the other eats them for a hobby, it is hard not to think of one without the other.

There is no arguing with critics who bestowed this film with five Oscars and the fans who have ranked The Silence of the Lambs as one of the Top 25 highest rated movies on IMDb. 9/10