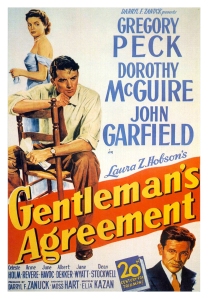 A Gentleman’s Agreement was a story way ahead of its time in 1947. Based on a novel that focused on anti-semitism, this Best Picture winner turned out to one of the Academy’s least successful Best Picture Winners, collecting only three statues.

When you research the movie, you will learn the movie was considered a disaster, and lead actor Gregory Peck didn’t like the movie and the director, Elia Kazan, which caused him to say it “the worse performance of my career.”

I went into this classic film with an open mind because I was inquisitive about how the whole concept would play out. Peck’s character Phillip Green gets tasked with writing an editorial piece on anti-Semitism in New York City. After the struggles to progress with the project, he decides to apply himself 100% and “become” Jewish. His plan is brilliant, except those around him support him initially and think he’s crazy towards the end. His insistence on playing the part is admirable, but it overcomes him, which costs him his engagement and career.

I understand that watching this film today, where racism is every other story on the news and on social media, must have been completely shocking and eye-opening back in the day. The concepts explored in this film was intriguing because I have no clue how bad it was back then; only you can see the same issues on some level in today’s society.

The subject material hasn’t changed at all, which makes it still a relevant story. I applaud everyone’s efforts on the project because the subject material is a touchy subject. Whether or not the film and novel were successful to the lengths of other stories, these two art pieces served as talking points on an issue that was once thought to be taboo.

As I cycle through the classic Best Pictures, I’ve had some hit and misses. I felt that a Gentleman’s Agreement was right in the middle of them all. It wasn’t as impressive as I had hoped and wasn’t terrible by any stretch. I could find myself watching it again someday; then again, I wouldn’t be upset if I never did also. Of course, I can’t end the review without pointing out how much I loved the exterior shots of a young New York City ready to be developed with hundreds of skyscrapers. 5/10