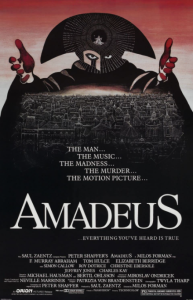 Wolfgang Amadeus Mozart has gone down as one of the most prolific composers the world has ever known. Amadeus won Best Picture in 1985 and is a fictional look into the great composer’s life as he struggled to write and orchestrate in the late 1800s. Considered one of the greatest films of all-time, this play turned motion picture won 40 of its 53 award nominations.

My first introduction to classical music occurred in the fifth grade. That was also the year I convince my parents to let me play the saxophone, which lasted all but a few weeks. I vaguely know who Mozart is and associate him with Beethoven, great composers whose music you might hear in the most random places and never realize it was their work.

Amadeus was a history lesson and a satire at the same time. The writers created a lot of the drama in the film, including the “rivalry” between Mozart (Tom Hulce) and Antonio Salieri (F. Murray Abraham). After reading the trivia and doing some research, I understood that a lot of the story is based on Mozart’s stories. However, all of it must be taken with a grain of salt cause some of it is true, and most of it was created just for this story.

Even though these films and period pieces are outside what I enjoy, I actually enjoyed Amadeus, that is, until the final act (last hour). I was fortunate enough to watch the Director’s Cut, which runs 180 minutes long, with some extra 20 minutes.

I enjoyed Hulce’s performance as the wild and crazy Mozart who spent the entire movie building up his music yet never committed the lyrics or notes to paper. He kept it locked up in his head, which drove everyone around him crazy. His wife loved him and put up his shortcomings, while his dad was the complete opposite and tried to force his own agenda on his brilliant son.

The only drawback of the character, for me, was his annoying laugh. Whether he was telling a story, listening to others talk, he was very immature (which was confirmed through letters), so of course, when he wasn’t the center of attention, he would let out a laugh. I didn’t bother to confirm the laugh’s accuracy, even though it was a major part of his character.

Like I mentioned earlier, the first two hours of the film were engaging and delightful. Then the final act starts, and it centers around Mozart’s heavy drinking and fading health. The entertainment stopped, and so did my enjoyment. It lost me since we spend most of the time watching Mozart in bed. I understand that everyone has to die, and this may have really happened, but it wasn’t entertaining to watch someone so brilliant fade so quickly.

I usually don’t like films with a back-and-forth story narrative, but this particular one worked just fine. It may not be for everyone, which is fine. Come for the laughs, the music, and the performances. 7/10