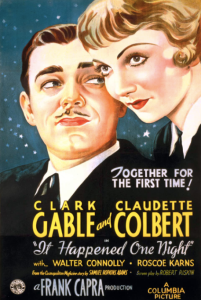 It Happened One Night has to be one of my favourite early Best Picture winners. I had no clue what to expect from this movie, except that it starred Clark Gable and should be in for a treat. Gable did not disappoint, and his chemistry with Claudette Colbert made for some very entertaining moments.

Colbert plays Ellie Andrews, an heiress who escapes from her father and goes to New York City. Gable plays Peter Warne, a newspaper reporter who happens to cross paths with Ellie on a bus. He plays dumb and pretends not to know her, but soon the pair end up stranded at one of the bus stops after venturing too far away and missing the departure. The pair form an agreement that Peter will get her to New York, but she has to pretend they are married, which will help shade her from the public eye.

One of the absolute best scenes is when two private investigators show up at a cabin they have rented to question her identity. The two break out into an unrehearsed skit about being husband and wife, filled with shouting and crying. I loved every second of it, and you could tell when the coast was clear, the two really hit it off, and the chemistry was only growing.

Another hilarious scene is when Peter steals a car. After getting duped by a guy who picked up the pair up hitchhiking, Peter chases him down to rescue their luggage and inadvertently steals the man’s car. Moments like that were meant to be fun and showcase the lengths this pair would go to survive.

I never doubted this film would have a happy ending. However, they sure took a long time to get there. After some confusion, Ellie rings her dad and agrees to be rescued, leaving Peter in the dust. Both return to their regular life routines but neither can help but remember the feelings they shared.

I really enjoyed It Happened One Night and would love to watch it again. Whether it’s for the performances or the story about opposites attract, this is a perfect date night movie. 8/10