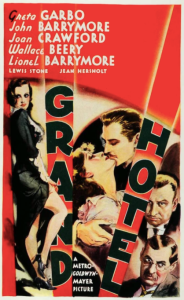 Grand Hotel was the Best Picture winner for 1932, the fifth movie in history to win such an honour. Given that the date of this review is 2021, we are close to celebrating the 100th anniversary of the first award ceremony, which means I still have time to learn how the Academy used to think.

I’m down to about a dozen films left to watch to complete the list of 93 winners. The majority of them are now between 1927 and 1940. This film fell in that gap and left me wondering what was so special about it. If you’ve read my other reviews recently, you’ll see that it is clear I either don’t understand the classic films of Hollywood, or the stories are just not for me.

Grand Hotel was highly regarded and praised upon its release. While doing some research, it was even dubbed the original “Ocean’s 11” theme and many people applauded its efforts to have so many moving parts to a simple story about a hotel.

I was still quite confused by all these reviews and high scores because I was bored out of my mind. There was no excitement, no entertainment, nothing interesting to keep me engaged. From start to finish, the entire film is driven by dialogue, and the few things the characters do to interact with each other are nothing exciting. There’s a “robbery” gone wrong, murder by telephone, and a card game with some drunk people. The main character is an honest thief, and the one he tries to take advantage of is a sweetheart but extremely annoying.

Yes, Grand Hotel is filled with colourful characters. Two beautiful dancers have a fair amount of scene time to assist the main plot along. Then the writers sprinkled in some talkative hotel staff with minor storylines to keep all the major characters active in scenes without one another.

I never felt the sense of urgency, or adventure, all words to describe the film. The characters, their backstories, and current situations did nothing to stimulate me. I was disengaged throughout most of the film, which I felt rushed to an ending. I’m not quite sure if it was symbolic of something or just a way to showcase how things can change at a hotel at a moment’s notice.

I can’t say this was terrible, because I have seen terrible. I can say it quite boring and not worth a watch. I also can’t knock its place in history because it’s been considered a gem for several decades. I will just say it’s an adventure you must take on your own. Whether you want to risk it or not, if truly up to you. 1/10