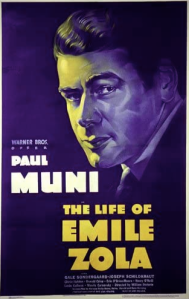 When I was growing up, I loved to study history. I did focus most of my efforts on sports and United States Presidents; however, I did manage to explore other areas of history. Lost among the millions, maybe billions of stories out there of years gone by, is the story of Emile Zola.

I mentioned to my wife that I had recently watched a movie about his life; she was taken aback. I had no clue who this guy was. We both surprised each other because I didn’t think she knew him, when in fact, I was the one late to the conversation that day.

In the world of military espionage and wartime drama, being labelled a traitor has always been part of the game. I want to think that the majority of the time, those hunches prove correct, while others, much like the case against Captain Alfred Dreyfus (Joseph Schildkraut), serve as a means to an end.

Zola (Paul Muni) was a struggling writer who finally caught a break with many publications that spoke out against the government. After more than a dozen books, Zola enjoyed the riches of his spoils when Dreyfus’ wife approaches him to write about his story and his innocence. He’s reluctant at first, but no evidence spurs his interest, and he agrees to take on the course, only to wind up sentenced to jail himself.

Most of the final act is focused in the courtroom, where the judge refuses to allow testimony to be shared because it would not be in the best interest of the military. Of course, these roadblocks don’t help Zola or Dreyfus, and things escalate pretty quickly. Zola’s family and friends beg for him to flee the country to defy his sentence, but Zola is a man and will face whatever comes his way.

Amazingly, after a shuffling of personnel in the military, Dreyfus is found not to be a traitor, and Zola’s charges are dropped. Sadly the man who was such an outspoken voice for the public against their government died due to carbon monoxide poisoning. Some say he was murdered, while others consider this a travesty.

I didn’t expect this film to be centred around an intense courtroom sequence, but that’s the focal point of the story. I enjoyed the back and forth between the defence and the prosecution. Zola gave an inspiring speech in his own defence, yet it didn’t help convince the authorities of his innocence.

I had never heard of Emile Zola or the Dreyfus case he fought tooth and nail for. I found this movie to be entertaining and engaging. The writing and acting kept me wondering how everything would play out. It was quite surprising. 7/10