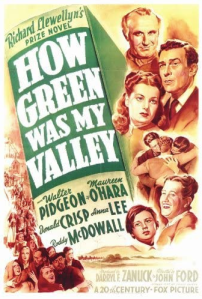 When I sat down to write my review of How Green Was My Valley, I felt guilty. Maybe I wasn’t quite in the mood for this film, or maybe I just didn’t care enough about what I was watching. Even though the subject material is the type of stuff to melt even the coldest hearts, I just wasn’t into this film.

How Green Was My Valley is based on a book that focuses on living in a small coal-mining town. Although the ties between community members run deep, this place offers no future outside of working deep in the tunnels of earth. The majority of the story is told by the youngest child, Huw (Roddy McDowall). We can see how tough it is to raise a family on little to no money, and when the mine decides to employ immigrants, the locals find themselves unemployed, making a dire situation even worse.

I wasn’t sure if this would be a silent film because the first dialogue comes about 12 minutes in. Don’t be confused by the poster though, the film is shot in black and white even if the poster is beautifully coloured.

I’ve been spoiled over the last 80 years with much better stories about the struggles of life. Whether they involve the same situations or not, the material I’ve been exposed to in my life has been more engaging than this particular best picture winner from 1941.

One has to assume that upon this film’s release, it was an eye-opening viewing experience. The world was a different place than and not everyone had an opportunity to see how other people lived across the globe. I bet when people sat down at the theatre to watch these people struggle in their tiny town, some people related and those who couldn’t even imagine being so poor.

There were very few things I took away from How Green Was My Valley. I am still curious about why this film would have such a title, but I am not overly interested in finding out. I am from a small town (a population of 9000), and my hometown was driven by a paper mill that closed when I graduated from high school. It was a shock to my community, much like what the coal miners experience when they are displaced. I could connect the two, which allowed me to feel a little sympathy for the family.

Sadly there wasn’t much for me to enjoy in this story, and I was quite bored throughout the two hours. I know there are people out there who adore this film which won five Oscars. However, I know that I won’t be the only one who thought this classic film was just meh. 2/10