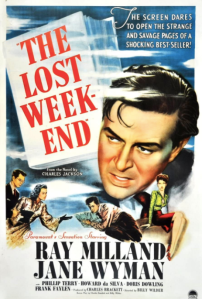 If I had to estimate the number of movies I have seen in my life, I would say over 2,000. Hundreds of them made me cry, broke my heart, got me upset, bored me to death, and made me look away because I can’t stand certain levels of gore.

When I started this Best Picture project, I never thought I would stumble across a motion picture so near and dear to my heart. The Lost Weekend is a film about a chronic alcoholic, Don Birnam (Ray Milland), who experiences one of the worse weekends of his life. His story and struggles are very personal because this addiction runs in my family, and I’ve seen the damage this disease can cause up close.

I thought that The Lost Weekend was one of the best movies I have ever seen. Milland gave a fantastic performance, which earned him a Best Actor statue. Whether he was sober or not, his life was a complete mess, and his acting made me feel like he was heavily invested in the character and his problems.

The supporting cast was great when dealing with Don’s addiction. Whether it was pouring him booze, listening to his rants, or collecting the stuff, he pawns at the shop, these supporting characters either fuel his addiction or tries to cut it off to the best of their ability.

The Lost Weekend also won Best Writing, Screenplay (Billy Wilder and Charles Brackett) and Best Director (Billy Wilder). I don’t know anything about Wilder or Brackett, but their combined writing efforts to portray the horrifying effects of alcoholism were superb. Whether the disease destroys the person consuming it or the consequences of their actions, these two researched and gave one of the most accurate depictions of what it is like to be around an alcoholic.

There are probably some people out there who feel this way too personal or that the material wasn’t motion picture-worthy. I would argue with them and say there aren’t enough stories like this. Sure someone could point out to other films that involve alcoholism. However, none of those have ever won the Best Picture award or even come close.

If I had to guess, I would say several hundred movies out there that deal with various diseases. Drinking is always at the forefront of movies, whether it be gangster or mafia-style movies or the basic tale of a family torn apart by someone’s inability to put the bottle down. We take all those stories for granted and thank our lucky stars that we don’t have those issues. Unfortunately, millions of people do have problems, which provide for an interesting look into their lifestyles and struggles.

I would not consider The Lost Weekend the greatest Best Picture of all-time. However, it is one of the best stories I have seen. 9/10