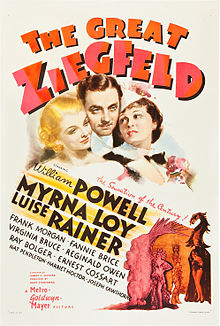 I’ve been to a total of eight Broadway shows in my lifetime, which includes The Phantom of the Opera, twice. When I tracked down the 1936 Best Picture winner, The Great Ziegfeld little did I know I would have a glimpse into Broadway history.

Florenz Ziegfeld Jr. (William Powell) was a brilliant mind, a man ahead of his time. He was the best con-man walking the streets of New York because he said and did whatever he could to get his shows produced. The man used and abused his friends and financers, always promising the next big thing was right around the corner; the only thing missing was money.

Flo travelled the globe to find the next big star and promised them a life of riches in America under his promotion. No matter what he said or did, his plays always had an opening night and a closing night. It didn’t matter if the story or performers were good; the audience would grow tired of his material, forcing him to always think of something new.

The Great Ziegfeld was a decent movie, although the film focuses too much on the stage performances, which took up a good chunk of the 177 minutes run time. I would have appreciated the movie more with a little less singing.

Ziegfeld is a guy you feel bad for, especially the cruel scene when he gets mocked at a barbershop by four random guys reading about his failures in the newspaper. When you look at how unorthodox he was as a promoter and producer, you just can’t feel bad for a guy who was pretty sly at getting what he wanted. He chased the money and the bright lights, just like P.T. Barnum in The Greatest Showman, which seems to be a theme that could describe the early days of show business.

On another note, I thought he was a terrible husband to his first wife. He managed to redeem himself with his second wife, who gave him a daughter he treasured. By this point in his life, the film upped the pace and breezed through his successes on and off the stage and rushed to an older Ziegfeld on the verge of death. (I blame this pacing problem on the fact the story focused too much on the shows.)

I will admit that this movie made me curious, and I spent some time reading his biography on Wikipedia after. Flo Ziegfeld was a Broadway icon in his day and eventually had a theatre named after him. That place doesn’t exist anymore, but Ziegfeld’s fingerprints are all over the beginning of Broadway, thanks to over 100 productions to his credit. 6/10