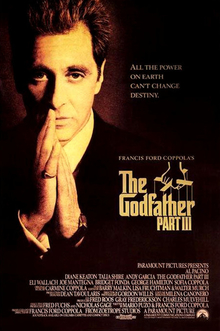 I was only eight years old when The Godfather III came out. I was not old enough to fully comprehend what this movie was about, nor was I old enough to join the masses who probably cried out when this film got released. Sometimes, somethings are just better left alone, which should have happened with The Godfather movies.

The first two Godfather movies are iconic films, having won Best Picture just two years apart. They rank among the greatest movies of all-time and are referenced regularly.

Someone, somewhere, thought that 16 years after Michael Corleone (Al Pacino) was seemingly at the top of his game and of the mafia world, that we needed a film with a moppy guy in his sixties looking for forgiveness.

The life of a mastermind criminal will definitely destroy one’s ability to be normal, whether physically or mentally. Michael spent most of his adult life taking names and building an empire to spend the later years trying to be a perfect member of society. Things get so bad for him that he decides to go to Italy and confess his entire life story to a Priest, so he can finally rest and focus on his health.

Just when you thought health, family issues, and many attempts on his life would slow him down, guess again. Even in semi-retirement, Michael is pulling strings on deals and turning in favours. He plans to pass his empire along to Sonny’s son Vincent Corleone (Andy Garcia). There’s only one problem, he’s in love and sleeping with his first cousin, Michael’s daughter Mary, played by Sofia Coppola.

There’s a whole mess of things for Michael to untangle, including a handful of business deals with the church gone wrong. I understand that the term Godfather has some religious background, so we get a heavy dose of the Catholic church for the first time in three films. And to make things even more interesting, the writers kill TWO popes in the film.

To be honest. I spent most of the film confused on who was in on what deal and who was double-crossing who. Even when I read through the entire plot summary on Wikipedia, I swear I still had more questions than answers available.

If I loved The Godfather as most people do, I’d probably be upset that this film turned out so badly. The original one was simple; the second one had brilliant intertwined stories about two people working their way up. I feel this third entry was a mess and jammed packed with so many subplots that it made the main plot (an old man giving up his empire) all that less entertaining. Now watching an old man die is not meant to be entertaining; it was just really hard to get invested in his story at this point in his life when members of the church are being gunned down, and backdoor deals seem to be the only way to do business.

Sadly I never rated this film when I watched it a decade ago. I had thought I had given the film a rating of six stars, but according to my IMDb profile, that is not the case. Just like the previous entry, I feel compelled to lower my score because the film just didn’t live up to what the Godfather has always been about. 5/10